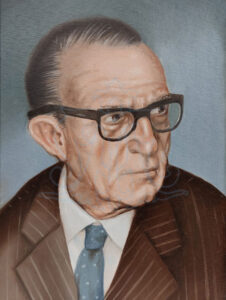 Dr. Raúl was born in Buenos Aires on May 5, 1897. He was the legitimate son of Victor Manuel Molina-former minister of finance during the presidency of Dr. Marcelo Torcuato de Alvear-and of Genovevea Seija Machado Peñaloza. He studied at the Faculty of Law and Social Sciences in his native city, where he then graduated as a lawyer in 1922. He married Emilia Franchini Dominoni and had two children.

He was a lawyer for the province of Mendoza before the Supreme Court of the Nation and a lawyer for the National Retirement Banks.  Later, he acted as professor of Argentine History, in the Faculty of Philosophy and Letters of Buenos Aires. He earned the National History Prize for his book Hernandarias, the Son of the Earth[1].

He was a full member of the National Academy of History, which he joined in 1949, with a conference on “Juan de Vergara, Lord of Lives and Estates in Seventeenth-century Buenos Aires”[2]. He was also a member of various institutions as well as president of the Argentinean Institute of Genealogical Sciences since 1963, and he also belonged to the Argentine Ecclesiastical History Board. He received endless honors from the different academic bodies of Uruguay, Chile, Bolivia, Colombia, Peru and Spain.

As director of the magazine History, which has published fifty volumes, as well as of the magazine of Genealogical Sciences, he presided over numerous honorary commissions on history, on the occasion of celebrations for men of our soil. In June 1963, he was commissioned by the government to Brazil, to gather documentary records of diplomacy with Portugal, during the May Revolution.

At the request of the Board of History of the province of Santiago del Estero, he was commissioned, along with Father Guillermo Furlong, to rule on the founding date of the city of Santiago del Estero[3]; and in the debate on the historical place of the old city of Santa Fe, founded by Juan de Garay, at the proposal of Dr. Agustín Zapata Gollán, director of the Colonial Ethnographic Museum of Santa Fe, the National Academy of History entrusted him, along with Father Furlong, his judgement on the date´s setting, which aroused wide interest. A new decision on the ruins of Cayastá, which he also made in the company of Father Guillermo Furlong, ended the famous controversy over the old Santa Fe, which was unanimously accepted by the National Academy of History[4].

In his academic performance, it is worth highlighting the paleographic version that he made of the royal decree of the Catholic Monarchs of June 20, 1500, through which the return of the Indians to the New World was ordered, forever rejecting all slavery purposes of the new race[5]. For his Hispanic work, he obtained a special scholarship granted by the Government of Spain, and for a year he toured the official and private Spanish archives of that great nation. He also visited Morón de la Frontera, and hence, undoubtedly, the esteem for the Morón in the province of Buenos Aires. He led the representation of our country in various congresses and assemblies of historical nature in various American nations, and everywhere the vastness of his knowledge and the strength of his testimony drew attention.

In 1963, the Scientific Research Council awarded him, for his outstanding merits, a special scholarship to carry out a work on the history of marine trade during Hispanic times, based on an authentic and meticulous interpretation of the navigation carried out in the Río de la Plata[6]. His articles and works on history, number in the hundreds and could be multiplied much more, thanks to a Biographical Dictionary of Buenos Aires, a handwritten work, and the true work of a titan that required years and years of work in the rooms of the General Archive of the Nation and in the of the Ecclesiastical Association of Buenos Aires. May heaven this work come to light; what is certain however, although not yet published, it is searched and studied by all the lovers and curious people who exist in our country, and by those who want to know the settlers of this Buenos Aires and the land of the 16th and 17th centuries.

With regard to his moral qualities, we will say that he was a true gentleman, open to friendship and dialogue and generous in sharing his treasures of knowledge all those whom came to request them. For this reason, he was a true teacher and why his students came loved him just after one day, and for this reason we loved him too.

At the end of August 1973, Dr. Molina gave his soul to God. In his last hour, he was comforted with the spiritual aid of Holy Mother Church; and at that supreme moment, he ratified the anecdote that we already know and that we transcribe here, as the end of this biography and as a miracle of Our Lady[7].

“In the 1960s – Dr. Molina speaks – I became seriously ill and I was visited by a Dominican religious friend of mine. During our talk, I bemoaned my illness and told the religious that I would be sorry to die, because I was engaged in a work on the Virgin of Luján, and I would like to finish it. The priest replied: «Don’t be afraid, keep going. The Virgin will give you life so that you may happily conclude your work”[8].

And so it happened. In 1967, Dr. Molina publicized his brilliant lecture on Our Lady of Luján. The prophecy had been fulfilled. But the kind Virgin extended his life for years more, so that he could see that her work was bearing fruit and that there were those who followed in his footsteps and that his name was ever since linked to the annals of the Virgin of Luján[9].

[8] This anecdote was known by many and also by us before the prophecy was fulfilled; therefore, there is no doubt about its authenticity.