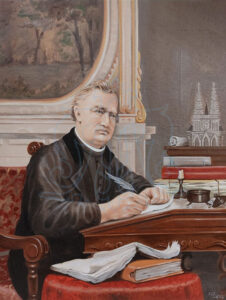 This author was born in Castres (France) in 1847 and was ordained a priest in Paris in 1871. During the same year he arrived in Argentina as a missionary and visited for the first time the sanctuary of Lujan (which had been built by Lezica and Torrrezuri), remaining captivated by the Image of Our Lady. He was a great missionary, and in two distinct periods he missioned in the lands of the Indians. During one of these occasions in the year 1875, he was miraculously saved from a sure death by the hands of the Indians through the intercession of Our Lady of Lujan. Dedicated completely to the diffusion of the devotion to Our Lady of Lujan, he undertook the writing of her story and traveled to Rome in order to obtain from Pope Leo XIII the pontifical coronation of the Holy Image (which occurred through the hands of the archbishop of Buenos Aires, Mons. Aneiros on May 8, 1887), for which he had chiseled in Paris a rich crown that was blessed by the pope. He magnanimously planned and began the construction of the current extraordinary church, whose cornerstone was blessed on May 15, 1887.

Apart from the History of Our Lady of Lujan, Fr. Salvaire wrote other works for the devotees and pilgrims and founded La Perla del Plata, the magazine of the sanctuary. Animated by great apostolic zeal, he carried out great pastoral work in Lujan as chaplain and rector of the sanctuary. He founded the Hospital of Our Lady of Lujan, the Circle of Catholic Workers, the School of Our Lady of Lujan, the Pilgrim’s Rest, the Conference of Ladies of St. Vincent, creating numerous parochial associations. He died on February 4, 1899 at only 52. He is buried in the right transept of the Lujan Basilica. His cause for canonization is ongoing[1].

Regarding the motivation of his work, when Fr. Salvaire was miraculously saved from death through the intercession of the Our Lady, he made a vow to spread and make known the devotion to the Immaculate of Lujan. He himself says the same in the dedication of colossal work: “My sweet Mother, I myself have experienced in an unspeakable way the wonderful influences of your tender protection, of your power and boundless goodness. Let this right hand remain still and without movement, stop my tongue, if ever during my life my heart comes to forget your marvelous mediation on my behalf and the promise that I made to you so urgently, to consecrate all my faculties to make you known as you deserve, to spare no means to praise you and commend your power and maternal tenderness, and to spread, as far as possible, to the furthest reaches of this Republic, your beautiful and sweet legend. This book, kind Protector, is the fulfillment of my unforgettable promise”[2].

Salvaire set out to base his story on historical documents, for which end he had to work diligently, investigating “in all the archives of the colonial period”, as he himself relates: “Thus disposed, I eagerly dedicated myself to the study of everything that could be related to the history of the sanctuary and of the Villa of Our Lady of Lujan, as I have already said, all the archives of the colonial era, because I was fully convinced that if, as Carlos XII said, history should be a witness and not a flatterer, only in the original documents deposited in the archives would one discover, together with the truth, that color that reveals an era and manifests an age, better still than the most perfect narration or description”[3].