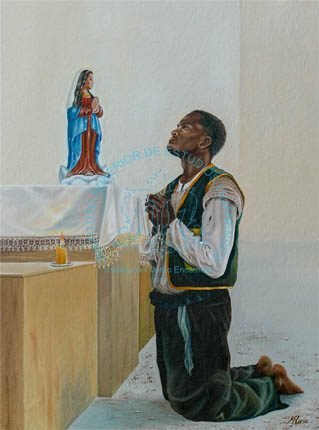 The servant of God, Manuel Costa de los Ríos, better known as “Negro Manuel”, most likely arrived in Lujan in the same caravan in which the small boxes containing the images of the Most Holy Virgin came, and according to a beautiful tradition, it was he who was the witness of the miracle of the cart and was so captivated by the image, that he wanted to remain until death at the service of the Mother of God as her faithful slave, even affirming, when his possession was being disputed, that he was “of the Virgin and nothing else”.

Mons. Presas specifies some uncertain facts about the ancient chronicles concerning this event. In the first place concerning the age of Negro Manuel at the time of the miracle, he says that he would have been around twenty-six years old. Secondly, about the origin of the slave, he declares that he was not originally from Angola-as one of the first chroniclers of the Virgin of Lujan supposes-but rather from Cape Verde, and more precisely, from Costa de los Ríos which is situated in the south of Cape Verde in Africa.

All these facts, thoroughly studied and documented, are even more specified in the work of the postulator for the cause of Negro Manuel, Fr. Guillermo Durán, “Manuel ‘Costa de los Ríos’, Faithful Slave of the Virgin of Lujan”. There he states, “He arrived at the Río de la Plata as a part of a batch of African slaves coming from Pernambuco (Brazil) to be sold in Buenos Aires. He was originally from continental Africa (Atlantic), from “Costa de los Ríos” in upper Guinea. On receiving baptism, to the Christian name “Manuel” was added the place of birth or origin, as was the custom of the time. For this reason, in the act of sale in favor of the Holy Image of Lujan, he is identified as “Manuel Costa de los Rios” or “Cape Verde” (peninsula). Being Guinean, he spoke in addition to his proper African language, Portuguese and with time, Spanish. It was this factor of origin that made these types of slaves highly valuable for the potential buyers.

Certainly, his fervor and dedication in the service of “his Mistress” as he liked to call her, was an example for all those around him and the Virgin showed her satisfaction with her slave, bestowing upon him innumerable graces and divine favors. The first chronicler of the Virgin, a Mercedarian of Holy Mary, gives us to understand that Negro Manuel had a familiar relationship with the Image; this is candidly reflected in this passage of his testimony:

“…and it was common opinion of the people that that most mornings Negro Manuel would find the Most Holy Virgin covered in dew and with thistles on her dress, and he began to cry to her, asking her what necessity she had to leave her niche, being powerful enough to work any kind of miracle without having to leave him”.

This account is of particular valor since, as the same friar affirms, he met Negro Manuel when he was already elderly: “…and I met him when he was old, dressed in a sack made from pulp and with a grown out beard”.

We know through Salvaire, “that Negro Manuel married a creole woman named Beatriz and that he must have been regarded with great consideration and esteem…” His entire life, from the moment of the miracle, was passed in the service and promotion of the cult of the Mother of God. It was he who, by divine inspiration without doubt-obtained the first chaplain of our Lady, as relates the same Mercedarian friar, Peter Nolasco of St. Mary: “Peter Montalbo arrived, appearing half dead, close to the door of the Oratory. Negro Manuel entered, and anointing his chest with the oil from the lamp of the already mentioned Image, Montalbo recovered his understanding, and beginning to console him, Negro Manuel told him that the Most Holy Virgin wanted him as her chaplain”.

As Fr. Salvaire refers, Negro Manuel “died in the opinion of sanctity”. And it is that, living in the service of such a good Mistress, without doubt he grew in love and imitation of Our Lord until he reached the reward of eternal happiness. Maqueda relates in these words the last moments of Negro Manuel’s earthly life: “Finding Negro Manuel in his last sickness, he said one day that his Mistress had revealed to him that he would die on Friday and the following Saturday she would take him to glory. In fact, his death took place the same day which he had foretold”.

On July 30th, 2019, the Congregation for the Causes of the Saints authorized the beginning of the cause of beatification of Negro Manuel.