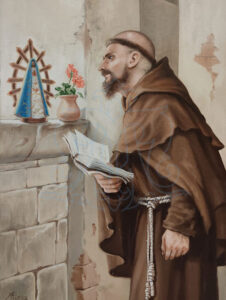 Fr. Antonio Olivier was Spanish, born in Palma de Mallorca in 1711[1]. In 1727, at the age of 16, he was clothed in the Franciscan habit there. While he was still very young, he excelled in the studies of philosophy and theology, and was named master in both.

He was a very cultured man, dedicated to study and very able in the ancient languages (Latin, Greek, Hebrew, and Arabic), grammar, translator in the classic Latin authors, author of certain works concerning moral and spiritual theology, and was the chronicler of his Order. While suffering a grave sickness, he made a vow to offer himself to the missions if he recovered his health and was marvelously cured. He obtained the title of apostolic missionary, desiring to spend the rest of his life dedicated to work for the conversion of the pagans. He therefore left for Peru in the year 1751, and his first mission was the celebrated missionary convent of Santa Rosa de Ocopa. In 1755, he arrived at Tarija, with the mission to rebuild the convent, which would eventually become the Collage of Propagation of the Faith. There, Fr. Antonio was the guardian during two distinct periods.

Around 1770, he arrived at his last mission, Buenos Aires, where he lived until his death which took place May 31st, 1787. In Buenos Aires, Fr. Antonio wrote numerous books on religion, theology, spirituality, but the majority were not printed. He was the inspector of the third order and chaplain of the convent of the capuchin sisters of Our Lady of Pilar, for whom he composed various writings, among which is counted the Mystical Catechism for the Instruction of Religious and a Commentary on the Rule of St. Claire. During these years in Buenos Aires, his fame as a wise and holy man grew.