PRESENTATION OF THE COLLECTION 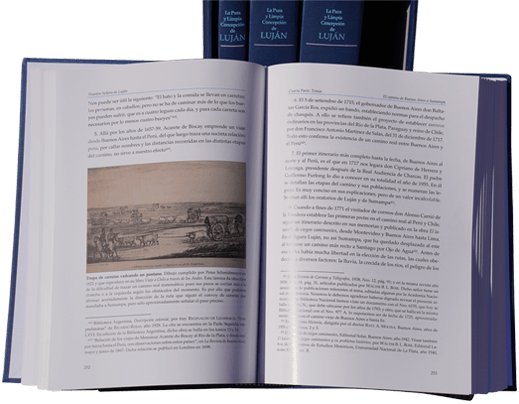 On the occasion of the 35th anniversary of the foundation of the Institute of the Incarnate Word (having occurred in the year 1984), of the 20th anniversary of the “Project Virgin of Lujan” in our Religious Family (1999), and being on the verge of the IV centenary of the arrival of the Image of the Pure and Fair Conception of the River Lujan to Argentina and its first miracle (1630), the members of the Religious Family of the Incarnate Word have desired to offer to Our Lady this collection in her honor.

It consists in a new edition of five fundamental works about the history of Our Lady of Lujan, each of irreplaceable value, which we have published in three volumes, of which one is made up of two volumes. Each one contains a presentation of its content and of the authors, as well as the working methodology used in each case. In fact, they treat of very diverse works, written by distinct authors and in different moments in history.

The publication of the collection The Pure and Fair Conception of Lujan has been prepared by a team of priests and sisters of the Religious Family of the Incarnate Word.

From the methodical point of view, we have worked in a different manner in each work, as is indicated in the presentation of the individual volumes, however, entirely respecting the authors’ texts.   We have unified in each volume, as far as it was possible, the mode of citing and the layout of the text, and we have updated some of the illustrations.

With this publication, the religious of the Religious Family of the Incarnate Word want to pay homage to Our Lady of Lujan, Patroness of our Institutes[2], to whom we are eternal debtors, desiring that she be increasingly known, loved, and venerated. In fact, we note with great joy that she is already known and loved on the five continents, where our missionaries have taken her image and have spread her devotion. For example, she is the Patroness of Tajikistan, a country whose evangelization was entrusted to our Institute by St. John Paul II in 1997.  A parish on the outskirts of Manila, in the popular neighborhood of Caloocan, attended by our missionaries for years, is also under her title. She has her proper advocation in Papua New Guinea where she arrived along with the priests of the Institute and where she is invoked as Our Lady, Queen of Paradise. We could give many more examples. To her maternal intercession we attribute in a particular way, since the beginning of the Institute, the ever-increasing number of vocations and their perseverance as well as the fruits of our apostolates.

To Mary of Lujan, and through her to her Divine Son, all our love and devotion. She is, as was said by Pope Pius XII, “the depths of the great soul of the Argentine people”[3]. In reality, Mary Most Holy must be the “depths of the soul” of every one of her children, since she is the most perfect means to arrive at union with Jesus Christ and to become in Him true children of our Heavenly Father. St. Luis Maria Grignion de Montfort teaches: “God our Father desires to form children through the means of Mary until the consummation of the world […] Also in supernatural and spiritual generation there is a Father, who is God, and a Mother, who is Mary. All true and predestined children of God have God for Father and Mary for Mother. And he who does not have Mary for Mother neither has God for Father”[4].

For this reason, this work is to be for its readers an echo of the voice of Christ who on the cross pointed to His Mother as our Mother: Here is your Mother (Jn 19:27); at the same time He says to her Here is your son (Jn 19:26). Commenting on the text of the gospel, St. John Paul II said precisely in Lujan: “These words are a kind of will of our Redeemer. He who with his cross fulfilled the eternal plan of God’s love, who with the cross restores the dignity of the adopted sons of God, the same one entrusts us, at the moment of completing his sacrifice, to his own Mother as children. In fact, we maintain that the phrase ‘behold your son’ refers not only to the one disciple who remained near the cross of his Master, but also to all men. The tradition of the sanctuary of Lujan has placed these words at the very center of the Liturgy, in which it invites all pilgrims to share. It is as if it meant: learn to look upon the mystery which constitutes the great perspective of the destinies of man on earth, and also after death. Also learn to be sons and daughters of this Mother, whom God in his love gave to his own Son as Mother. Learn to look in this way, especially during difficult times and in circumstances of greater responsibility. Do so at this moment in which the Bishop of Rome wants to be with you as a pilgrim, praying at the feet of the Mother of God at Lujan, sanctuary of the Argentine nation”[5].

To her, the Pure and Fair Conception of Lujan, we entrust the fruits of the publication of these works.

[1] In a letter of the 4th of October 1885 to Fr. Salvaire, published by the same author in the introduction of his work; in this collection, vol. 2, book 1, pages 13 and following.