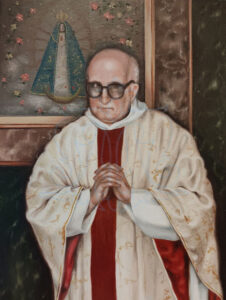 Mons. Presas was born in La Plata, Argentina in 1912, and was the son of Spanish immigrants. While still a child he moved to Spain with his family. Having completed his ecclesiastical studies in the Pontifical University of Comillas, he was ordained a priest on July 25, 1938 in Spain, but he carried out all of his priestly ministry in Argentina- in La Plata but mostly in Morón. He was a great historian both of Morón, mainly of its Marian invocations, but above all, of Our Lady of Luján, to which he dedicated his best efforts. He was a disciple and friend of Dr. Raúl Alejandro Molina, from whom he learned in part the exactitude of the historical method. He was enamored with Our Lady of Lujan. His work is such that he has been recognized as the greatest of historian of Lujan by highly accredited historians[1].

His works, between books and pamphlets on Our Lady of Lujan, are vast:

Mons. Presas died on April 29, 2005 and is buried in Morón, in the hermitage of Our Lady of Buen Viaje, of which he was also a historian.