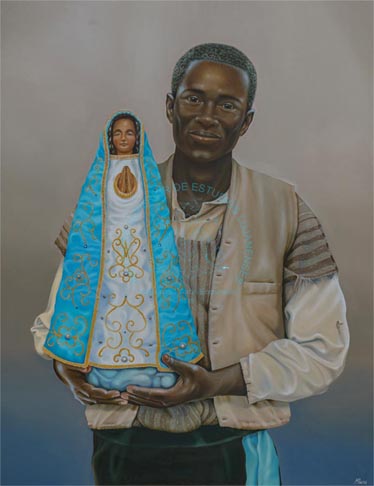 “The slave of the Virgin of Lujan is standing and facing the person looking at the painting. In this way he doesn’t present himself, but rather he presents the Virgin to us, remaining behind her, as her faithful slave.  He is represented as young, as he is described by Mons. Presas in his work, “Our Lady of Lujan”.

He is dressed poorly. He wears a cincture which is the same color as the mantle of the Virgin, as a symbol of his belonging to her.

He is smiling because he is happy as the Virgin’s slave. There is no greater Mistress then she! He served the Virgin with joy and in this way is an example for us.

He holds the Virgin in his hands, presenting her to the world. As if his wanted to give her to us so that we also may take her for our Lady. He does not look at the Virgin but rather at us as if saying: ‘This is also your Lady’! The Virgin is in front, looking at us, her children.

The image of the Virgin is without rays, crown, or silver moon since these ornaments were added after the death of Negro Manuel. She is wearing a white and sky-blue dress that Ana de Matos had placed on her according to the Spanish custom of dressing the Immaculate with these colors. In fact, the ancient narratives relate that the faithful slave would remove thistles from her dress when the Virgin would relocate to visit the peasants.  Below the dress appear the clouds at the base of the terracotta image”.

(from the Description of the painting written by Sr. María de Jesús Sacramentado Riera, SSVM)