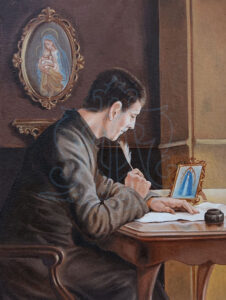 Felipe José Maqueda was born on August 22, 1740, legitimate son of Bernabé José Maqueda and Maria Josefa Vejarano, and was baptized by his uncle, Carlos José Vejarano, in the cathedral of Buenos Aires four days afterwards[1]. His father was a native of the kingdoms of Spain, and had a supermarket in the city that must have performed well, because from the official censuses of the years 1738 and 1744 we know that he had several rented houses. He had five children[2]. The oldest was named Maria Justina; “a woman of great virtue-writes Salvaire-and the first teacher of don Bernardino Rivadavia; from her, this illustrious man learned the first letters and the rudiments of the Holy Religion, and in the company of this virtuous lady he remained for long periods, in those first years of his life, in the shadow of the sanctuary and in the very house of the Virgin’s chaplain”[3].

Concerning the second child: Andrés, we know that he was a Dominican friar[4]. Of the third, Domingo, we know for various years he was enlisted in the capital’s prison calvary militia, and afterwards held various positions in the canonry of the Villa of Lujan[5].

Felipe José was the fourth of the children, and Gabriel José, the fifth and last. They both embraced the clerical state, and spent their entire priestly lives in the shadow of the the sanctuary[6].

It is very possible that, at the death of her spouse, the widowed woman, María Josefa Vejarano, moved with her children to Lujan and there lived in a house near the sanctuary until the end of her life[7].

The entire family must have had a special devotion to St. Joseph, since his name frequently appears in the family names.

Doctor Carlos José Vejarano died on May 16, 1775 in Lujan, naming Juan de Lezica and the teacher Gabriel José Maqueda, his nephew, as executers of his property, and he was buried in the sanctuary’s presbytery while his nephew Felipe José, assistant to the departed priest, writing and signing the death certificate[8].

The mentioned Felipe had always been assistant priest at the parish; but often he replaced his brother, Gabriel as the Virgin’s chaplain[9].

On account of the abundance of information, we will say that for a time we see the priest Felipe José Maqueda as the religious administrator and treasurer of the Brotherhood of the Most Holy Rosary of the Villa of Lujan[10].

[6] DA. 1740-1742. Matrimonial act of their parents in DA. 1729. The two priestly brothers are seen immediately after their ordination in the sanctuary of Luján.

[9] It is enough to go through the parochial books of those years when they appeared in Luján.

[10] ABL., Book of the Brotherhood of Our Lady of the Rosary. Figure in the position of administrator, Felipe Maqueda, year 1792.

[11] SALVAIRE, History, volume 1, ch. 20, VI. We must note here that Salvaire gives information of some characters that we cannot verify, because the original documents that he had in his hands are lost today. But Salvaire’s word is true in the absence of documentary evidence, since every expert knows how to value Salvaire’s honesty and critical spirit.