Presentation of the Third Volume

Presentation of the Third Volume:
Our Lady of Lujan.
Historical-Critical Study 1630-1730
BY MSGR. JUAN ANTONIO PRESAS 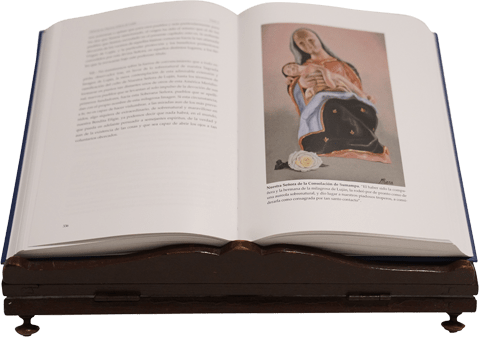 The third volume of the collection The Pure and Immaculate Conception of Lujan contains the most important, documented, completed and published writing about the first hundred years of the history of Lujan. It is the masterpiece of the great historian of Lujan, Mons. Juan Antonio Presas.

Mons. Presas was born in La Plata, Argentina in 1912, and was the son of Spanish immigrants. When he was still a child, he moved to Spain with his family. Having completed his ecclesiastical studies in the Pontifical University of Comillas, he was ordained a priest on the 25 of July, 1938 in Spain, but he carried out his entire priestly ministry in Argentina: in La Plata but mostly in Morón. He was a great historian both of Morón, mainly of its Marian invocations, but above all, of Our Lady of Lujan, to which he dedicated his best efforts. He was a disciple and friend of Dr. Raúl Alejandro Molina, from whom he learned in part the exactitude of the historical method. He was enamored with Our Lady of Lujan. His work is such that he has been recognized by highly accredited historians as the greatest of historian of Lujan.

His works, between books and pamphlets on Our Lady of Lujan, are vast:

The present volume is the second edition of his most important work, published in Buenos Aires on the occasion of the 350 years since the arrival of the Holy Image to Argentina, with the sponsorship of the Pérez Companc Foundation, and which was dedicated on the first page with these words:

To the Argentinian Nation, in order to celebrate
The 350 years since the arrival of the Holy
And Miraculous Image to its shores:
Our Lady of Lujan,
Its Heavenly Patroness,

THE PEREZ COMPANC FUNDATION
Offers to the Argentinian people
In the Marian year of 1980,
With faith in God and willingness to service,
This work which studies the origins
Of the glories of Mary of Lujan.

The volume contains three books published previously by Mons. Presas (in 1974, 1977, and 1978 respectively): Our Lady of Lujan and Sumampa, The Place of the Miracle, and Lujan before Science and Faith, completed and enriched for this unified edition, especially the first, whose documentation was profusely increased.

In the words of Fr. Guillermo Furlong, “It treats of a magnificent and definitive work; and we would even add: encyclopedia. It contains all that science and history can require about the origins and cult of Our Lady in her two images of Lujan and of Sumampa in their first hundred years […] it will be difficult for any document to appear that questions the general conclusions, based on this voluminous and substantial work, although God wants others, and not a few, to emerge, in order to clarify facts and minor events, in addition to confirming these realities.”

From methodological point of view, in this edition we have adopted the following criteria:

-since the original edition is in black and white, where it was possible, we have replaced the original images for ones in color. This is also true for the photos of the texts of Pedro Nolasco de Santa Maria’s chronicles as well as those of Oliver-Maqueda, published in the sixth part.

-in two cases we have omitted the original photographs because it was impossible for us to obtain them, and those which the edition of Mons. Presas contained were very blurry and were of poor photographic quality and hence were unable to be reproduced.

-in other cases, we have added illustrations and photos which the edition of Mons. Presas did not have, therefore enriching the illustrative aspect of the work. These we have indicated with an asterisk.

Consequently, with these changes, we have modified the descriptions of a few illustrations where it was necessary, indicating them with an asterisk.

In the introduction of one of his last works, Mons. Presas said, “I have written much about Lujan, and I hope that my writings have not been in vain and the lines which I now am going to trace in the fulness of my years will be, by their reality and effectiveness, as the ancients say, like the swan song that at the end of its days comes forth with the best of its songs, and that everyone will come to understand that Lujan has a superiority which truly enriches souls, the peoples, and the entire Argentine Nation.”

May God see fit to bless this edition of the most important work of Mons. Presas, and that his wish, which encouraged the worthy and historian during all his efforts, be a reality in many souls, peoples and nations.