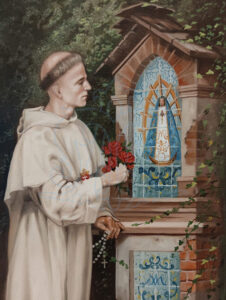 We owe the individuation of this character to Dr. Raúl A. Monina. As he is the first declarant of the history of the origin and cult of Our Lady of Lujan, it is worth pausing in order to know his genealogy, which will confirm the family data which he himself transcribes and that supports the veracity of his narrative.

Fray Pedro begins his story in this way: “I verify having heard from my deceased father, my grandmother, and other people from the countryside (whom I do not remember individually), that during the time in which the Kingdoms of Portugal and Castile were governed by one crown; and during which time my father was born…” immediately continuing with the relation of the miracle.

He closes the information with the following declaration: “I certify that I am seventy-one years old”[1]. With the few pieces of information of name and age, Dr. Molina could exactly individualize Fray Pedro. “It was a singularly difficult task”, writes the mentioned doctor[2]. By the name: Pedro, and the age: seventy-one, he came to find a baptismal certificate from a certain Pedro Arruz and Aguilera[3], and found that the above-mentioned Pedro´s grandmother was alive until he was nine years old, and of course, his father.

His parents were named Pascual de Arruz and Maria de Aguilera; Pascual, his father, would die during the first days of November of 1705[5]. His mother was the daughter of Augustín del Corro y Aguilera and Maria Luque y Morán, the parents of the latter being Cristóbal de Luque y Jinerbra Perez Morán.  Jinebra-hence the great grandmother of Pedro Nolasco-made her will in 1675 and would die around March of the same year, that is to say, when her great grandson was only 9 years old[6].

Pedro Nolasco de Santa Maria most likely entered the Mercedarian Order very young, since already in 1692, we see him in offices of responsibility, such as secretary of the Father Provincial, Fray Juan Cano Aragón[7].

In 1695, we find him as superior of the convent in Buenos Aires and afterwards as its procurator. It is at this time when his name appears on land deeds that the Mercedarians had in Lujan[8].

According to the information given by Fr. Jorge Maria Salvaire, he was acting as temporary chaplain of the chapel of Our Lady of Lujan when its owner, Dr. Bernardino Verdún de Villaysán, moved to the parish of the Holy Church Cathedral of Buenos Aires[9]; and we know for certain from Santa María himself that he also held the position of interim chaplain during the chaplaincy of Dr. Francisco Rendón and that during his time as chaplain several miracles occurred, of which he reports to the Ecclesiastical Court[10].

He was also chaplain of the ranch of don Diego de Santana, a neighbor from the town of Arrecifes and a person very devoted to the Virgin of Lujan[11].

In the Table of offices of the Mercedarian Order, he appears for the last time in 1746; not like in the Table of the Provincial Chapter of 1753 which would indicate his death[12].

We close this brief biography of the Mercedarian friar with the same words with which the secretary of the Ecclesiastical Tribunal of 1737 closed the declaration of the mentioned witness.  In its shortness, it is a great tribute. It is written like this: “Up to this point is the relation of the Reverend Father Fray Pedro Nolasco de Santa María, of the Order of Our Lady of Mercedes, a person of authority and teacher in his Order”[13].

[10] ABL. The reader can also see it in our documentary part.

[11] ABL. Our documentary part may be referenced.

[13] he relationship of Santa María is given in its entirety in its respective place. Let us add here that we have found a document that also gives us the age of the Mercedarian friar, in AGN., IX, 4-8-5, volume 58, p. 9. He declares on January 7, 1699, to be thirty-four years old. The said religious reached an old age.