Presentation of the Second Volume

Presentation of the Second Volume:
History of Our Lady of Lujan
By Father Jorge María Salvaire 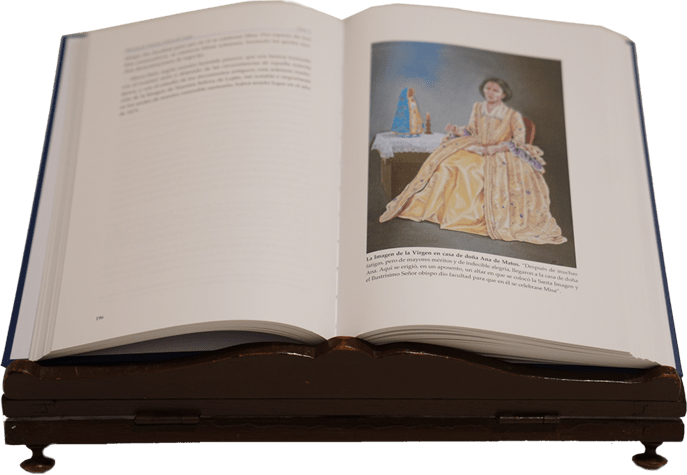 The second volume of the collection, The Pure and Immaculate Conception of Lujan contains, in two books, the monumental work of Fr. Jorge María Salvaire, titled, The History of Our Lady of Lujan. Her Origin, sanctuary, town, miracles, and cult, originally published in two volumes in 1885 in Buenos Aires by the printing press of Pablo E. Coni, with impressions by H.D. Woodwell which illustrate the miracles and history of Lujan. The Fabro Editions of Buenos Aires publish a second edition of only one volume in the year 2014. The present edition is the third.

It treats of the first complete and ordered history of the events of Lujan up until the present moment[1].

Its author was born in Castres (France) in 1847 and was ordained a priest in Paris in 1871. During the same year he arrived in Argentina as a missionary and visited for the first time the sanctuary of Lujan (which had been built by Lezica and Torrrezuri), remaining captivated by the Image of Our Lady. He was a great missionary, and in two distinct periods he missioned in the lands of the Indians. During one of these occasions in the year 1875, he was miraculously saved from a sure death by the hands of the Indians through the intercession of Our Lady of Lujan. Dedicated completely to the diffusion of the devotion to Our Lady of Lujan, he undertook the writing of her story and traveled to Rome in order to obtain from Pope Leo XIII the pontifical coronation of the Holy Image (which occurred through the hands of the archbishop of Buenos Aires, Mons. Aneiros on May 8, 1887), for which he had chiseled in Paris a rich crown that was blessed by the pope. He magnanimously planned and began the construction of the current extraordinary church, whose cornerstone was blessed on May 15, 1887.

Apart from the History of Our Lady of Lujan, Fr. Salvaire wrote other works for the devotees and pilgrims and founded La Perla del Plata, the magazine of the sanctuary. Animated by great apostolic zeal, he carried out great pastoral work in Lujan as chaplain and rector of the sanctuary. He founded the Hospital of Our Lady of Lujan, the Circle of Catholic Workers, the School of Our Lady of Lujan, the Pilgrim’s Rest, the Conference of Ladies of St. Vincent, creating numerous parochial associations. He died on February 4, 1899 at only 52. He is buried in the right transept of the Lujan Basilica. His cause for canonization is ongoing[1].

Regarding the motivation of his work, when Fr. Salvaire was miraculously saved from death through the intercession of the Our Lady, he made a vow to spread and make known the devotion to the Immaculate of Lujan. He himself says the same in the dedication of his colossal work: “My sweet Mother, I myself have experienced in an unspeakable way the wonderful influences of your tender protection, of your power and boundless goodness. Let this right hand remain still and without movement, stop my tongue, if ever during my life my heart comes to forget your marvelous intervention on my behalf and the promise that I made to you so urgently, to consecrate all my faculties to make you known as you deserve, to spare no means to praise you and commend your power and maternal tenderness, and to spread, as far as possible, to the furthest reaches of this Republic, your beautiful and sweet legend. This book, kind Protector, is the fulfillment of my unforgettable promise”[2].

Salvaire set out to base his story on historical documents, for which end he had to work diligently, investigating “in all the archives of the colonial period”, as he himself relates: “Thus disposed, I eagerly dedicated myself to the study of everything that could be related to the history of the sanctuary and of the Villa of Our Lady of Lujan, as I have already said, all the archives of the colonial era, because I was fully convinced that if, as Carlos XII said, history should be a witness and not a flatterer, only in the original documents deposited in the archives would one discover, together with the truth, that color that reveals an era and manifests an age, better still than the most perfect narration or description”[3].

The valor of this praiseworthy history, with whose composition Fr. Salvaire was intensely occupied during eight years, is truly singular. Later scholars have shown that from a critical-historical point of view, it has certain limits, particularly with regard to the first period of Lujan’s history, however they do so while still highly valuing his work. However, these limits, due to the historical circumstances in which Fr. Salvaire worked, in no way diminish the valor of his writing, which laid many of the foundations for the work of successive historians.

The great historian of Lujan, Mons. Presas, affirms that the History of Salvaire was “unanimously” applauded by critics of the time. And after citing numerous praiseworthy testimonies of that time, he concludes:

“We fully endorse and reaffirm these judgments, which even today critics respect in their entirety. However, we make a few observations about the History. It covers a period from 1630 to 1885, the date of its printing. And even though the work still retains the gravity of a well-documented book today, not all its parts carry the same weight or enjoy the same authority.

Thus, the first chapters dealing with the origin and cult of Our Lady of Luján, because Fr. Salvaire was lacking the primary contemporary documentation concerning the events, they lack that experience that gives the story the stamp of authenticity. Its most valuable part is that which runs from the years 1730 to 1815, since for the work he had a whole storehouse of first-hand documentation in the same sanctuary and in the Municipality of Luján. The part that is from the year 1815 until its publication is astonishing by the amount of data that refers to favors and graces of the Virgin of Lujan, as well as of acts of honor carried out by those who gave ex-votos; but because the author lacks the perspective of time, many other events of that time have been forgotten, as they have not been recorded.

Today we know much more about Our Lady of Lujan then the religious Salvaire did, since time does not run in vain. But this science and knowledge that we currently have of the events of Lujan are the fruit and thanks to the concern, study, commitment and zeal that animated the spirit of Salvaire. His work in that period was that of a giant: a colossal hymn of love and gratitude to the Mother of God; a trumpet call that resonated to the ends of the homeland and the world, in an effort to make known more each day this Virgin, Mother, and Queen of Lujan”[4].

From the methodological point of view, we have adopted the following criteria in this edition:

The outline is the following

I. The Introduction (in the first book, 131 pages numbered with roman numerals), which includes:

II. The History of Our Lady of Lujan (with Arabic page numbering starting again in each book). It includes:

In this edition, on the other hand, we have numbered all the pages with Arabic numbers in each of the two books of the work, including the introductory part and the appendices.

We do not know what these corrections introduced by Fr. Salvaire were, since many of the cited documents were lost. Moreover, in the case of ancient documents, we have found it better to respect their original writing. For these reasons we have chosen to transcribe the citations of these documents as they were by Father Salvaire, without spelling corrections, even when the errors are evident. This applies mainly for those documents which Fr. Salvaire uses as his resources, and especially for the extensive collection of documentary appendices that he places at the end of the second book.

On other occasions, particularly when it comes to testimonies without reference to the source or citations from old books that we have been able to confirm, we have corrected spelling errors.

[1] On Fr. Salvaire, see J.M. PRESAS, Our Lady of Lujan. Critical-Historical Study 1630-1730. First Part, Writers, volume 3 of this collection. Also by the same author Jorge María Salvaire. The Apostle of the Virgin of Luján, Morón 1990. Bishop Presas says that the best biography of Salvaire, up to that moment, is that of F. C. ECHEVARRÍA DE LOBATO MULLE, Father Salvaire and the Basilica of Luján, Luján 1959.